Over 5000 students from 70 institutes, from India and abroad, were a part of North India’s largest Annual Cultural Festival, Algorythm, hosted by Chitkara University, Himachal Pradesh; on October 5, 2019. This year, the festival brought together a huge number of student teams with fresh talent & great energy for a day packed with events ranging through all categories, to celebrate culture & talent like never before!

Chitkara University believes Cultural Festivals are not just for fun, they add value to a student’s learning experience – the most effective way of bringing youth under the same platform, enhance social interaction and facilitate exchange of cultural ideas and thoughts. Hon’ble Dr. Madhu Chitkara, Pro-Chancellor, Chitkara University, Himachal Pradesh; said, “Algorythm Festival is a grand celebration of culture, diversity, talent, friendship and collective & individual aspirations, in the field of arts, culture, literature and other activities.” She opined that the ultimate goal of the cultural fest is to help students stage their talent and get recognition, while also learning from shared experiences, skills and talent.

Celebrating the future torchbearers with a fiesta which is all about bringing together creativity, intellect and talent of the youth, this year’s event line-up had major events including, Vogue, Stomp The Yard, Fantastic Toe, Folklore, Halla Bol, Euphonious Fusion; fun & game events including, FIFA 19, Four-A-Side Soccer, CS Go, 8 Balls of Fire, 3-on-3 Basketball, NFS, PUB-G, Art Nouveau, Paintball, Zorbing, Top-It-Up; and a mega contest to grab the coveted title of ‘Mr. & Ms. Algorythm 2k19’. Each event had participants in huge numbers and an equal number of enthusiastic supporters – displaying a fantastic fusion of competitive spirit and friendly vibe.

The throngs at the fest were a testimony to the sheer magnitude of the event. “Celebs, music, fashion, glamour, fun, friends – we can’t even begin to describe what CUHP Fest Algorythm means to us youngsters!” exclaimed a group of students participating in the fest. Indeed, this year’s Algorythm was a potent mix of electric energy and exciting activities that made for a day full of memories that would last for a lifetime.

Students from across the nation set the Algorythm stage on fire with their heart throbbing and astonishing performances, winning the hearts of both judges and audiences. The trendsetters for the year 2019 were the team from IHE College, who were declared the winners of ‘Vogue’.

Dance performances ruled over hearts from Bhangra to Natti. Setting the stage on fire with her dance moves was Lassya from DAV College, Chandigarh; who was declared the winner of ‘Stomp the Yard’ contest; followed by the team from Agarsen University who bagged the first position in the event ‘Fantastic Toe’ dance competition. Event ‘Folklore’ was filled with some mind-boggling performances but students from CGC, Landran stole the show.

In the Abhivyakti Zone, for event ‘Halla Bol’, the street play put up by the team from GGDSD College, Chandigarh, took the winning trophy. For the event ‘Euphonious Fusion’ Ajay Grewal from Chandigarh University, stole the first prize after leaving the audience awe-struck with his soulful voice. Finally, the coveted title for ‘Mr. & Ms. Algorythm’19’ was bagged by Mr. Sahil from Bahara University; and Ms. Divyanshi from LPU, respectively.

Algorythm 2k19 concluded in a glittering valedictory ceremony at the campus. The best performers were awarded with a heavy stash of goodies and cash prizes worth Rs. 5 Lakh by Hon’ble Dr.Madhu Chitkara, Pro-Chancellor, Chitkara University, Himachal Pradesh. Finally, an electrifying performance by Punjabi singer-actor Mankirt Aulakh closed the event on a high note, as he set the stage on fire with his chart-busting numbers on the backdrop of technicolour lights and grooving audience. 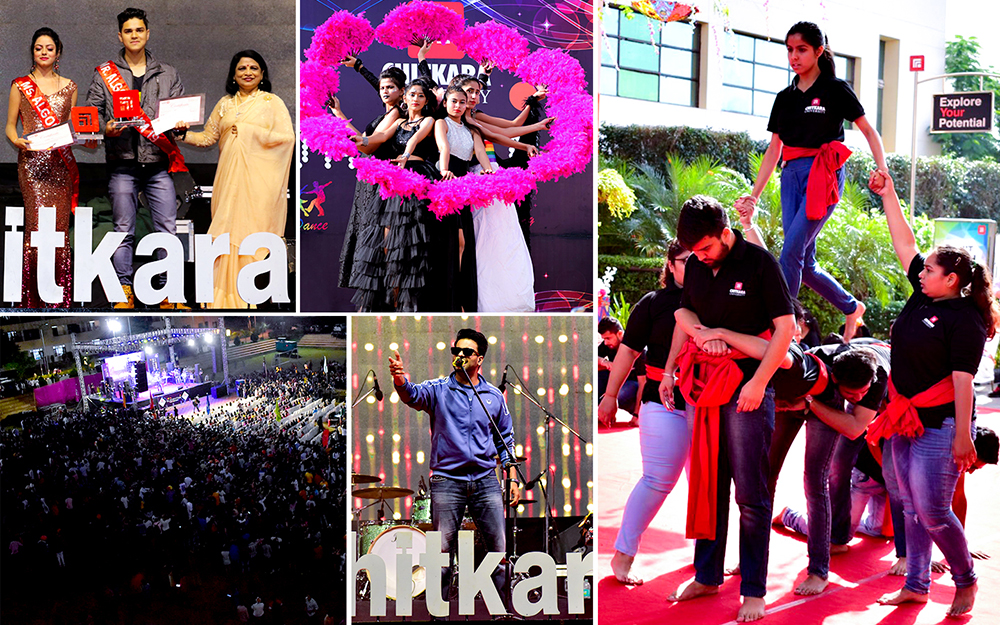